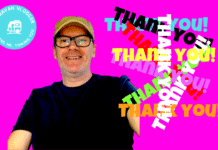 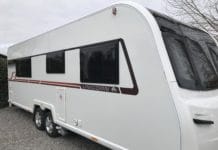 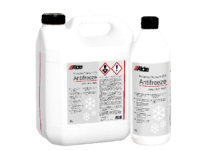 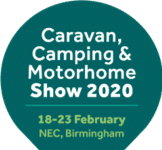 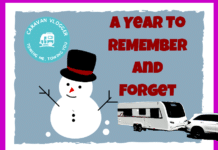 I’d spent a few hours creating a spreadsheet of what I wanted to see at the show. I’d even colour coded the items, Motorhomes Blue, Caravans Pink, Accessories Orange. I know you won’t believe me, so I’ll include a photo of it.

The thing is, I wanted to write a day by day schedule of things I wanted to look at. However, I didn’t know exactly what models would be there. So, instead I wrote a vague; day one do this, day two do that. Obviously I had more details than just “this” and “that”, but only just.

Anyway, the same thing happened this year, that happened last year. “Oh look the Faro oh look a Carthago, oh look…” You get the idea. As one of my kids might say, I was in a “hot mess”.

Plans went out of the window.

The show itself was a runaway success. Friday was the busiest day in the history of the show with 14,702 people attending, I know, I counted them all myself. I was a little concerned there might be a low turn out due to the number of storms as well as the perceived threat of Corona Virus.

The Stars Were Out

Did you see any of the stars in attendance? I saw Dr Hilary briefly in one of the coffee shops, but didn’t ask if he was a subscriber to our YouTube channel, I’m pretty sure he is. Having said that, if you use the word “star” very loosely, I met some lovely vloggers (and subscribers too). It’s always a thrill meeting both. With vloggers, especially the one’s I subscribe too, I have this weird feeling they are my friend, because I watch their adventures. Of course, I don’t really know them, but most (actually I’d say all) of them knew me as well. Actually, no, apart from one, who will remain anonymous, pretended they knew me, but it was sort of obvious they didn’t have a clue who I was, not did they watch my vlog. I don’t care either way. Meeting subscribers is always a treat. The weirdest thing is being told they sit having their dinner watching me on YouTube on their TV. Whilst I’m watching Michael Portillo travelling a country in a train, they are watching me talking about caravanning. I hope that’s something I never take for granted.

One thing I was surprised about is that there were more Motorhome YT channels than there were caravan ones at the show. Fortunately I watch both, so knew the Motorhome ones as well.

On the Friday there was a meet up arranged by Karina and Jules of HereWeTow. There were a lot of people there. I tried to count from a photo and there was at least 70 people. Wow! I have to admit I was more than a little intimidated with the amount of people and stayed on the periphery talking to people I knew. Which was a bit of a cop out really. However, I did speak to a few people in real life, that I speak to on Twitter, which is a little surreal but good non the less.

I did make a few purchases. I bought a Colapz 3 in 1 bucket / watering can. I’d previously used a watering can to fill the flush tank for the loo and decided to swap it for a collapsible bucket (not Colapz). It was rubbish, I couldn’t fill the flush tank up without getting soaked myself. So, back to the watering can. Unfortunately this had found itself into the garden and storm Dennis had blown it to a corner of the garden. Ok, yes I forgot it. So, with no bucket or watering can I had to use the sink bowl to fill the toilet flush which is square! It got messy. I also bought some toilet chemicals, yes, I really am the last of the big spenders.

It really is unbelievable the amount of effort that goes into these things. Just the logistics of getting the caravans, motorhomes, tents, awnings etc etc. My favourite part of the show was, rather weirdly, the Motorhomes! Oh my God, I run a Caravan website and TY channel. But, they are all “Leisure Vehicles” or Recreational Vehicles. I don’t normally get to see a lot of caravans or motorhomes so it’s good to walk around and in them. Problem is, I’m having such a good time that I forget to film any of them. Actually that’s not strictly true, however, it is tricky getting in and out of them, I like to give, let’s say “members of the buying public” the space they need without me running around with a camera in my hand.

As I’m not paid by anyone to write this article, I can say it exactly how I found it. Before I forget, I do have some review vlogs coming up soon, so make sure you’re subscribed to our channel.

For me, too much space was handed over to the Camping part of the show. I know it has “Camping” in the title and I knew what to expect. However, for me I would have liked to see more caravans and motorhomes. I especially would have liked to have seen Lunar there, for example.

Oh and I forgot, there were loads of “static caravans” too, no interest for me. I would say probably half the halls were caravan and motorhome related. The rest were camping and statics.

Although there were a lot of people it never got too busy (looking at it from a punter’s perspective). From a vlogger’s perspective it was a bit too busy for me to do everything I wanted to. You might have seen vlogs where they are filming with no one else around. Well, I can’t get in the halls that much earlier (if any earlier at all) so I’m dodging people as I try to film. Many people don’t like being on video and I can understand that, so I don’t like filming when people are in caravans. People are ALWAYS in caravans 🙂

I stayed at Chapel Lane Caravan and Motorhome Club site, which is probably a 30 minute drive. A really nice site, which I’ve stayed at before a few years ago whilst holidaying in the area.

See you in October then?